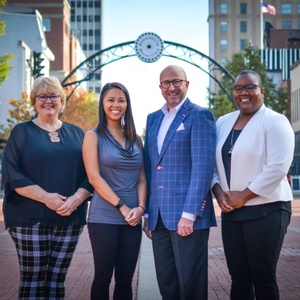 Jeffrey serves on the Board of Directors of the EVSC Foundation as President and was Treasurer for ten years; Friends of University of Evansville Music as past President for four years and treasurer for four years. In addition, Jeffrey volunteers for the PTA at Thompkins Middle School as treasurer; Highland Elementary School PTA, member of the Advisory Board for Hangers, the EVSC Student Clothing Bank; Board member of the USI Foundation; and tutors at Highland Elementary on a weekly basis. Jeffrey is also a founding member of Teacher Locker, a resource that provides school supplies for K-12 teachers in the EVSC.  He was President of the Rotary Club of Evansville in 2013-2014 and past Treasurer of Rotary District 6580. He has three young daughters.